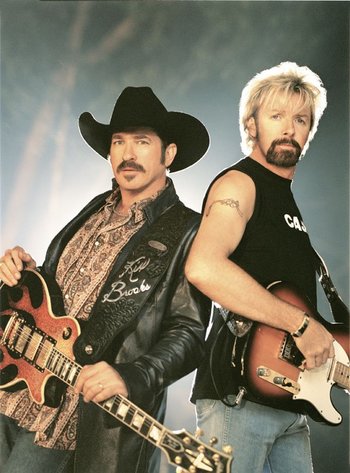 "If you know which one is Brooks and which one is Dunn ... you might be a redneck."
—Jeff Foxworthy
Advertisement:

A long-lasting Country Music duo composed of Leon Eric "Kix" Brooks and Ronald Gene "Ronnie" Dunn, Brooks and Dunn is arguably the definitive country music duo. After several years as struggling solo singer-songwriters, the two were paired at the suggestion of Arista Records Nashville executive Tim DuBois. And all was good. Their first album, Brand New Man, launched four consecutive #1 hits with its first four singles, and went on to sell five million copies. Among those songs was the smash "Boot Scootin' Boogie", instrumental in sparking a line-dancing revival craze that kept up for many years afterward.

Throughout the 1990s and into the 2000s, the duo was no stranger to country music radio, racking up a total of twenty Number One hits and fifty chart singles overall. They were also a shoo-in for the Country Music Association's Duo of the Year award (winning it from 1992 through 2006), as well as an Entertainer of the Year award in 1996 after the smash cover of B. W. Stevenson's "My Maria", which was also the biggest country hit of that year. The duo started to slip into more of a pop sound, maintaining the hits for the time being but losing its critical acclaim. Come 1999, the duo hit its first commercial low point, as the album Tight Rope produced only one big hit and disappointing sales. Montgomery Gentry — who was only two singles into its career at that point — got the 1999 Duo award at the Academy of Country Music.

Only two years later, Brooks & Dunn got back on track, launching that year with "Ain't Nothing 'bout You", the biggest hit of the duo's career and the biggest country single of 2001. The hits kept on coming for the next few years, but following a second Greatest Hits album, they started to fade away again. Hillbilly Deluxe did account for the duo's last #1 hit in "Play Something Country" and the signature song "Believe", but Cowboy Town sold poorly (even if it produced three Top 10 hits). Kix also found work as a radio host, succeeding Bob Kingsley on the countdown show American Country Countdown in 2006.

In 2009, Kix and Ronnie announced that they would be retiring as Brooks & Dunn. This retirement was led off by a comprehensive #1s... and Then Some compilation, which included two new low-charting singles. Afterward, both members began solo careers on Arista. Dunn released his self-titled album in 2011 and charted in the Top 10 with "Bleed Red", but abruptly left the label in 2012. Kix's New to This Town followed later in 2012. Dunn released another solo album in 2014, and signed to Nash Icon Records in 2016, the same year that saw the duo reunite to tour with Reba McEntire in Las Vegas. In 2019, they announced a duets album titled Reboot, with re-recordings of their major hits starring modern country acts. The lead single to this album is a re-recording of "Brand New Man" featuring Luke Combs.

For all the backstage drama and so forth, there was a huge prize waiting at the end: Induction into the Country Music Hall of Fame in 2019. The first exclusively post-1990s act to earn induction (Garth Brooks and Alan Jackson before them had chart activity in the 1980s), their catalog of music, revved-up honky tonk and inspiration to many duo acts to follow has placed them among country music's elite, and both were genuinely grateful and happy to take their place in the Hall.