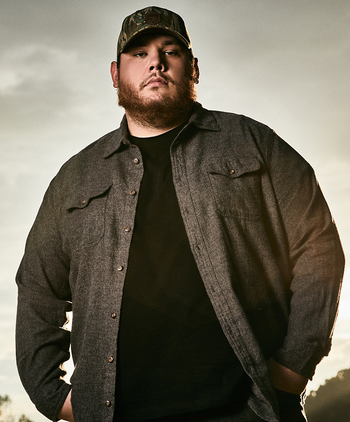 A Country Music singer from Asheville, North Carolina. Luke Albert Combs (born March 2, 1990) first released his music independently in 2014, starting with a pair of extended plays and the song "Hurricane", which got heavy sales and notched the country music charts based off said sales. This initial buzz led to him singing to Columbia Records Nashville in 2016, who promptly shipped "Hurricane" to country radio.
Advertisement:

Due to the combination of heavy airplay from iHeartMedia stations and the existing buzz, his debut release "Hurricane" topped the Country Airplay charts in 2017, making him the first male artist to have a multi-week #1 with his debut single since Darius Rucker did so in 2008. "Hurricane" quickly proved to be no fluke, as the followups "When It Rains It Pours" and "One Number Away" both topped that chart too. Columbia re-issued his debut album This One's for You in 2018 with a few bonus tracks... including "She Got the Best of Me", which in late 2018 made him only the third artist in country music history to have his first four singles all go to #1 there.

Combs's music has been widely praised for his strong singing voice, sharp lyricism, and his combination of traditional country and mainstream country-pop influences.