Favors for the Sexy 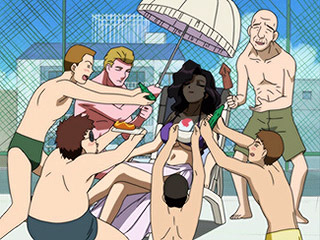 She doesn't have to display this trope. Men will do that for her.
"All the other girls in school they give her dirty looks
She got an "A" in math and never cracked a book."
— Brooks & Dunn, "Rock My World (Little Country Girl)"
Advertisement:

When a sexy female enters the scene, expect all the males in the area to spring into action, trying to curry her favor by doing all kinds of little things for her, like getting her a drink, making sure she has a seat or fetching anything she asks for, no matter how difficult it is to obtain.

Keep in mind, the people actually doing this trope are the (generally male) service granters, and they are doing it entirely from what's left of their own free will that hasn't been turned to mush by lust. The recipient may be aware of the effect she has, and may use it to her advantage, in which case see I Have Boobs, You Must Obey! However, she might not have a clue and may just see the guys as being nice. Someone who's lived their whole life this way may think it happens to everyone. If the woman in question views her beauty as a curse, this trope just serves to make her suspicious that any man who does something nice for her is enacting this trope rather than being genuinely kind.

May be done for The Tease. Note that because Women Are Wiser and All Men Are Perverts, the people performing this trope are almost Always Male, while the recipients are almost always female. In female-oriented works, however, particularly popular Bishōnen are likely to have their own Instant Fan Club of girls who display this sort of behavior.

This could lead to Pretty Freeloaders. Compare Courtly Love, The Dulcinea Effect, and Unwanted Harem. Also compare and contrast with the Honey Trap, when the effect is deliberately taken several steps further and used deliberately to gain a specific (and usually disastrous) favor.

Justin uses his sexiness to hypnotize Izzy and Eva into giving him the million dollar cash prize, and brags about it in the confessional.

Justin uses his sexiness to hypnotize Izzy and Eva into giving him the million dollar cash prize, and brags about it in the confessional.