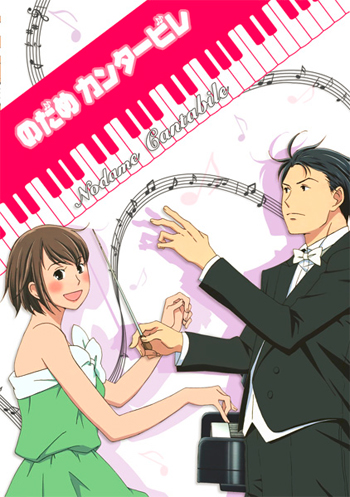 Nodame Cantabile is a josei manga by Tomoko Ninomiya with anime and live-action TV adaptations, centered around the two protagonists, Shinichi Chiaki and Megumi Noda (more commonly referred to by the whole cast as Nodame). The story begins at Momogaoka College of Music where both protagonists attend. Chiaki is a talented violinist and pianist, considered one of the top students at the school, who dreams of becoming a conductor. He is extremely handsome and popular, an excellent cook, very neat and stuck-up. Nodame is an extremely talented but wild piano player whose ambition is to become a kindergarten teacher. She is a complete slob, a terrible cook, and generally acts extremely strange. The two first meet when Chiaki is thrown out by his piano teacher after an argument, and winds up being taught under the same teacher as Nodame. They later discover that their apartments are next door to each other.

The series follows the musical careers of both characters as Chiaki eventually decides to follow his dream and pursue conducting. At the same time, the relationship between him and Nodame goes through numerous highs and lows, growing ever stronger in the process. Chiaki eventually assumes control of Orchestra S, assembled by Franz von Stresemann, a conductor-in-residence from abroad.

The manga originally ran from 2001 to 2009 in the josei magazine Kiss, with a two-volume sequel collectively known as "Opera-hen" that ran from 2009 to 2010, bringing the total volume count to 25. The anime adaptation first aired in 2008, and two sequel seasons were released, "Paris Chapters"/"Paris-hen" and "Finale", both of which detail the manga chapters that take place in Europe, mostly Paris. The anime in general follows the manga very closely, so much so that the season titled "Finale" isn't really a finale at all because the anime leaves the story open much like the manga did in those parallel chapters.

Season 1 has also been dubbed in English

by Animax, using the talent of Bang Zoom! Entertainment instead of their usual Singapore-based actors.

The show is highlighted by its beautiful performances of classical music, as well as its seamless blending of said music into the creative lives of its characters.