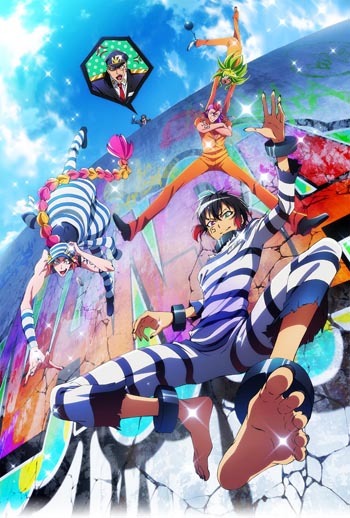 Don't be fooled - Breaking out of prison isn't all fun and games.note  Top to Bottom: Hajime, Nico, Rock, Uno, and Jyugo.
There's a group of guys that are trying to escape from prison......wait a second, are we talking about Prison School here?
Advertisement:

We're not? Okay then... Nanbaka, alternatively known as The Numbers, is a manga note despite its heavy shonen elements, Comico is an all-ages web magazine, so it cannot be categorized as such which began as a Comico web manga

by Sho Futamata. The manga got licensed under Crunchyroll

until the license expired in 2017, and the webcomic is currently is released in multiple languages on Comico's Pocket Comic app. It also received an anime

(which is available worldwide bar Asia, picked up for a simuldub by Funimation

and produced by Satelight), which aired in the Fall 2016 Anime season and Winter 2017 Anime seasons for two cours.

So...where were we? Oh yes, the guys escaping from prison.

We have Jyugo (inmate no. 15) who's good at nothing but escaping prison, Rock (inmate no. 69) who enjoys eating, Nico (inmate no. 25) who loves anime and games, and Uno (inmate no. 11) who's a gambler and a womanizer (or so he'd like to think). Along for the ride are Hajime Sugoroku, the no-nonsense supervisor of Building 13, and his subordinates, Seitarou Tanabata and Yamato Godai, plus all the other wacky prisoners and supervisors of the elusive Nanba Prison.

Then again, is it really all just escaping in Nanbaka? Don't bet on it...

The manga is ongoing.