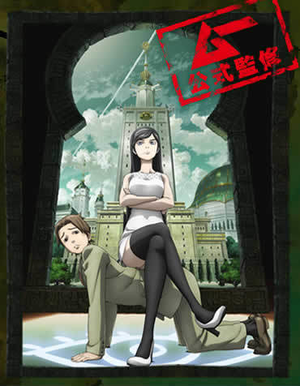 "I hate the occult!"
Advertisement:

The date is July 1999, and people were wondering if the world was going to end. At Waldstein Academy—known by its nickname "Occult Academy" for its rather odd field of study—the principal, Junichiro Kumashiro, has died of what the media is claiming as a heart attack. When his 17-year-old daughter, Maya, comes to his funeral (late), the truth is revealed—his love of the occult had gotten so out of hand he summoned a demon.

Maya quickly disposes of said demon, but that's not the real story here. The story really begins with a naked man descending from the sky. He is Fumiaki Uchida, a (former) psychic from the year 2012, apparently sent to stop the world from ending in an alien invasion under the cover of a teacher at the academy, Minoru Abe. His and Maya's destinies collide as Maya plans to get rid of the school that tore her family apart, while Fumiaki uses her assistance to find and neutralize an object or person called the "Nostradamus Key", which, when activated in conjunction with Nostradamus' prophecies, could begin said alien invasion.

The third entry in Aniplex and TV Tokyo's Anime no Chikara series (preceded by Sound of the Sky and Night Raid 1931), this Anime First series started in Summer 2010, ending in the fall.

US residents were able to legally watch this series at Crunchyroll; as of May 28, 2021, this service is no longer available.

There exists a manga adaptation by Kei Toru that loosely retells the main plot, a set of four shorts bundled with the DVD/Blu-Ray release involving a young Maya and Ami taking care of a tsuchinoko, and a light novel side story compilation written by the scriptwriters where each chapter focuses on a different character/set of characters among the main cast.