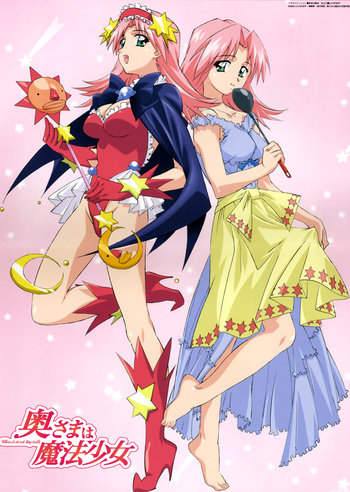 Oku-sama wa Mahou Shoujo: Bewitched Agnes (or My Wife is a Magical Girl: Bewitched Agnes) is a magical girl comedy. It focuses on the married woman Ureshiko Asaba, who's actually a Magical Girl called Agnes Bell. Two individuals enter her life: The Magical Girl Cruje Gapp, who's supposed to be Ureshiko's successor, and Kagura Tatsumi, who recently moved away from his college and into the boarding house Ureshiko lives at.

All is not well, as Ureshiko is the current guardian of Wonderland, which her mother created, but Cruje may erase Wonderland and recreate it after her own will, once she succeeds Ureshiko. At the same time, Ureshiko grows farther away from her husband, and closer to Kagura.