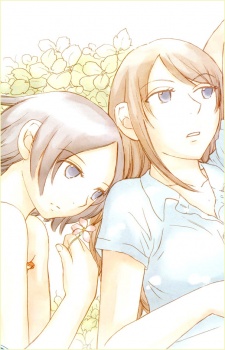 Octave by Haru Akiyama is a yuri manga published by Kodansha in 2008.

Constant target of vicious rumors and social unacceptance in her hometown, 18 year-old Yukino Miyashita moves to Tokyo to flee from her former life fronting a minor idol group. Her teenage dreams dashed to pieces, she tries to deal with life while working as an assistant manager for a modeling company under a lecherous boss. Yukino's loneliness is shattered by a chance meeting with the gorgeous Setsuko Iwai, a 22 year-old composer, who quickly takes a liking to the depressive girl. In a flurry of raw emotions, they have sex and work out their feelings for each other afterwards.

Vicious memories, former trysts, self-esteem issues and lukewarm friends make navigating this dramatic lesbian romance intense. This manga is mature — a serious take on the Yuri Genre as well as sexually-charged and realistic.