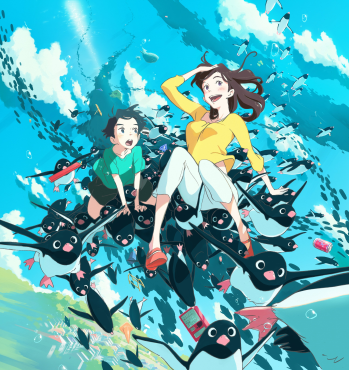 Penguin Highway is a Japanese science fiction coming-of-age novel written by Tomihiko Morimi (The Tatami Galaxy, The Eccentric Family, The Night Is Short, Walk On Girl) published in 2010. In 2018, it received a manga adaptation in Monthly Comic Alive and an anime film adaptation by Studio Colorido (Typhoon Noruda). Yen Press released an English translation of the novel in 2019.
Advertisement:

Fourth grader Aoyama and a mysterious older woman known to him as Onee-san (Lady), who is a dental assistant and also Aoyama's first crush, seek out to discover the reason why penguins are suddenly appearing in Aoyama's quiet suburban neighborhood.