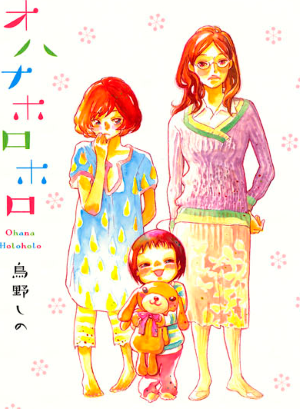 Maya, a translator, used to date a girl named Michiru when they were both in high school. Although they were in love, one day Michiru abruptly disappeared without explanation. Maya slowly went through the process of moving on, only for Michiru to turn up again one day five years later as suddenly as she had left, this time with a young toddler boy in tow. Maya has no intention of getting back together with Michiru, but when she happens upon a wonderful apartment she can't afford on her own, she suggests they all move in together, and Michiru agrees.

So goes Ohana Holoholo, a josei manga by Shino Torino which was serialized in Feel Young magazine from 2008 to 2013. It covers the everyday lives of Maya, Michiru, Michiru's son Yuuta, and Nico, a neighbour of theirs in the apartment building who is very fond of Yuuta and has his own connection to Michiru. Although the action mostly focuses on the adults' daily goings-on as they look after Yuuta, underneath that it is also the story of the rekindling relationship between Michiru and Maya.