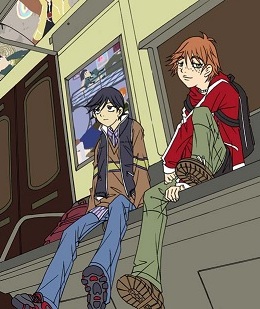 Tory Blake is fifteen, a genius, and bored. He spends his time breezing through school, doodling, worrying his mother, playing 90s computer games with his college-aged neighbor, and documenting everything that happens in his life in worrying detail. One night, something happens that promises to alleviate his boredom: a mysterious boy, Colin Stephens, and his guardian move into the duplex next door. Over the next year, Tory becomes increasingly obsessed with figuring out the mystery behind his neighbors' bizarre actions, to the point of transferring schools to get closer to Colin. What secrets could Colin be hiding? What is the Gaia Project, and how does Colin fit into it?

Off*beat is an OEL Manga by Jen Lee Quick, the first two volumes of which were published in 2005 and 2006 by Tokyopop. Despite the efforts of its small but devoted fanbase, the third and final volume is still in limbo. However, Jen posted a notice on her DeviantArt page assuring her followers that Off*beat would be concluded sometime in 2012.

By the same author, a webcomic named Witch's Quarry

A Kickstarter was successfully funded on May 3rd, 2013 for reprints of volumes 1 and 2 by the new publisher for the series, Chromatic Press, as well as a serialization of volume 3 to begin summer 2013.