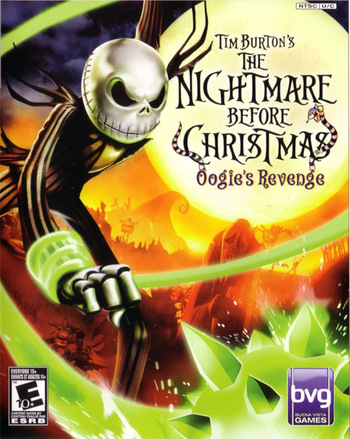 The Nightmare Before Christmas: Oogie's Revenge is a PlayStation 2 and Xbox action game released in 2005 by Buena Vista Games and developed by Capcom. Gameplay wise, it's based on the format of Capcom's own Devil May Cry series.

The game is a sequel to the movie. Jack gets bored with Halloween again and sets off to find something new to spice up Halloween with. Once he's gone, Lock, Shock and Barrel revive Oogie Boogie, whose new plan is to take over all Seven Holidays. Just as his plan nears completion, Jack returns...

Around the same time this game came out, another game called The Nightmare Before Christmas: The Pumpkin King was released, this game serving as a prequel to the movie.