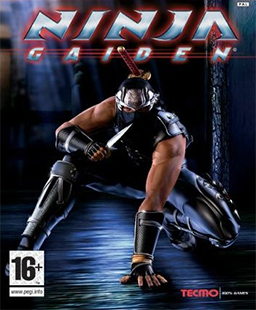 Ninja Gaiden is a 2004 Hack and Slash game developed by Team Ninja and published by Tecmo (now Koei Tecmo). It was released in March, for the Xbox.
Advertisement:

Players control Ryu Hayabusa, a master ninja, in his quest to recover a stolen sword and avenge the slaughter of his clan.

It is a revival of Tecmo's Ninja Gaiden series, and is set in the same continuity as Team Ninja's Dead or Alive fighting games. It received a series of Updated Rereleases: In 2005, Ninja Gaiden Black came out for the XBox, with addditional difficulty settings (including the infamous "Ninja Dog" setting), enemies, costumes and the missions from the downloadable "Hurricane Packs". In 2006 Ninja Gaiden Sigma came out for the PlayStation 3, with additional weapons, gameplay modes, and the inclusion of Rachel as a playable character. In 2012, Ninja Gaiden Sigma Plus was released for the Play Station Vita.