Video Game / Tak and the Guardians of Gross 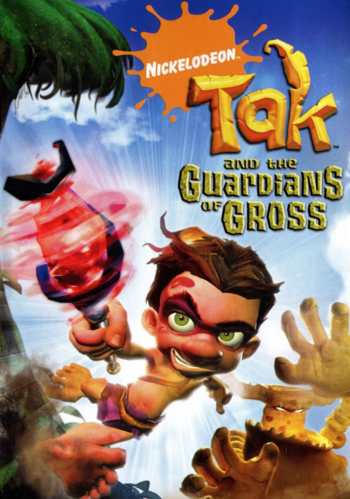 Tak and the Guardians of Gross is a 2008 video game stand-alone sequel to Tak and the Power of Juju, Tak 2: The Staff of Dreams and Tak: The Great Juju Challenge made by THQ and Nickelodeon for the PlayStation 2 and Nintendo Wii. It shows that Tak has accidentally released four giant monsters known as The Big Gs, each one based on some sort of grotesque element: Trashthulu (made out of trash and stones), Slopviathan (made out of slime), Gorgonzilla (made out of cheese) and Stinkolossus (a giant head that creates stinky tornados). He now has to defeat them before anyone notices, with a strong focus on Colossus Climb along the way. Unlike previous games, which were 3D platformers with a heavy focus on exploration and collecting items, this is a much more linear and simplistic platformer with a clear point A to point B structure and fixed camera angles. It was also made as a direct tie-in to the TV show based on the previous games.