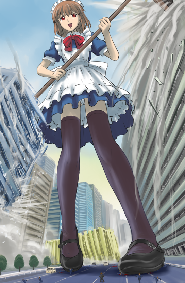 Get used to it, you're going to be seeing a lot of this.
Syukusho Gakuen or Shrink 'High in its English incarnation, is a freeware Japanese game created in RPG Maker VX.
Advertisement:

The plot revolves around the detective, Chijinda You, investigating the mysterious events and disappearances at Yabaize High School. The game plays itself out like a straight JRPG, where you explore for clues and items and engage in various battles for the first part of the game. You'll find yourself running into characters from Japanese anime left and right. You can even get Kyon as a party member. It seems quite innocent enough.

Then you find out just why it's called Shrink 'High.

Needless to say, the focus of the game takes a sudden turn. Suddenly, 90% of the cast is bigger than you. And most of the 90% will either mistake you for an insect, or be a part of the secret society that's behind it all, and will do anything to ensure you don't meddle in their plans anymore.

This game was until recently Japan Only, but a fan translation was created with added content. The only currently available download of the English version is here

. NOTE: that file requires that you install

into the game's folder to make it work correctly.

Has a sequel referred to in English as Shrink High Gaiden Hanpane Island. Unlike the original game, it is distributed commercially, so the English patch

is useless if haven't bought the game itself. It takes the adventure to a girls' boarding school on the eponymous island. Chijinda must go there to investigate a series of disappearances similiar to those at Yabaize, while also searching for his missing friend/partner, Narue...