Video Game / Tales of Symphonia: Dawn of the New World 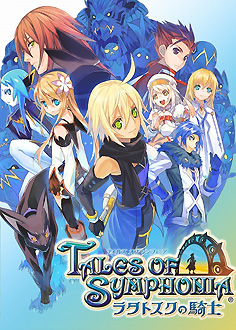 Courage is the magic that turns dreams into reality.
Advertisement:

The game takes place two years after the end of the original, and things did not turn as well as our heroes had hoped. When the two worlds of Tethe'alla and Sylvarant were merged into one, it invalidated every existing map and threw the climate of the new world into chaos. Furthermore, tension is stirring between the two civilisations: the people of Tethe'alla look down upon the less-advanced people of Sylvarant, to the point where a group of Sylvaranti calling themselves "The Vanguard" have begun a campaign of military resistance against the Tethe'allan Church of Martel.

Emil Castagnier is a timid and ostracised boy whose parents were killed in the "Blood Purge" of Palmacosta, an attack by the Church of Martel that was apparently led by Symphonia protagonist Lloyd Irving. While the other kids in his town revere Lloyd as a hero who saved the world(and rebuilt their town), Emil despises him and wishes he had the strength to avenge his parents.

One day, he meets and befriends two people: an enigmatic Vanguard warrior named Richter Abend, and an Action Girl called Marta Lualdi. Marta is being hunted by the Vanguard due to the Plot Coupon embedded in her forehead, which contains the dormant Summon Spirit Ratatosk. Determined to protect her, Emil makes a pact to become a Knight of Ratatosk, allowing him to use a fraction of the Summon Spirit's power in battle but awakening a much more dangerous and ruthless side of his personality in the process.

The slumber of Ratatosk is the cause of much of the chaos in the new world, as his presence interferes with that of the new World Tree created at the end of Tales of Symphonia. Thus, Emil sets out with Marta to awaken the other slumbering servants of Ratatosk and in turn awaken the Summon Spirit himself, whilst protecting her from the pursuing Vanguard and seeking his vengeance against Lloyd.

Dawn of the New World plays a lot differently than its predecessor. The player only has Emil and Marta as permanent members of the party, and over the course of the game they meet and join up with the other heroes of the first game, who are in various stages of disbelief about the situation with Lloyd. To fill out the roster between them, Emil is able to defeat and recruit any regular monster in the game. Cooking is used in the game to power up the monster beyond the usual leveling, and can also evolve them into their different variations. Gathering monsters also helps Emil become stronger as more of the Centurions' cores are awakened.