Video Game / The Nightmare Before Christmas: The Pumpkin King 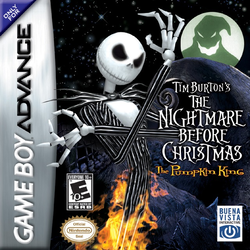 The Nightmare Before Christmas: The Pumpkin King is a Game Boy Advance game released in 2005 by Buena Vista Games.

Taking place years before the film, the story begins with Jack looking forward to this year's Halloween before he discovers Halloween Town overrun by bugs. It is up to him to deal with this infestation and find out who is responsible for this.