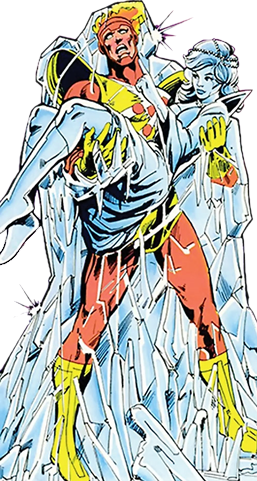 Together forever as lovers or enemies.note Firestorm and Killer Frost.
Captain Cold: Fire and Ice...
Firestorm: A played out theme, don't ya think?
Captain Cold: Got a soft spot for the classics.
— Injustice 2
Advertisement:

Fire and ice. Two distinct opposites that could never work out together, right? Wrong. In the land of fiction, it’s common place to see these two elemental powers in close proximity with each other. They provide a great contrast, either covering for each other's weaknesses or serving as each other's Achilles' Heel.

They can be best buddies, reluctant teammates, or mortal enemies. So long as they constantly interact, then this trope applies.

Subtrope of Fire/Water Juxtaposition and Elemental Rivalry. Given Personality Powers, the characters will often also form a Red Oni, Blue Oni pairing. They'll also contrast in terms of appearance, where the "fire" character will have warmer colors in their design and the "ice" character will have cooler colors (often blue), often going hand in hand with Orange/Blue Contrast. When the motif is done via terrain, see Hailfire Peaks.

If an electric character is added to this mix, it becomes a Fire, Ice, Lightning dynamic.