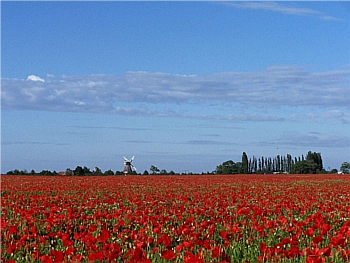 "Yeah I am red, you are blue
I'm old school and you're so new
But I guess I could forgive you tonight
When you're cold, I like to burn
I cut lines, you wait your turn..."
— Lady Gaga, "Red and Blue"

There's just something about red and blue, the way these two colors complement each other but also seem to oppose each other. Since they contrast so well, they seem to be paired together in some form more than any other two non-gray scale colors: hot and cold, red team and blue team, red ribbon (2nd place) and blue ribbon (1st place). And this leads to their inevitable contrast in symbolism, and ultimately in tropes.

Contrast of blue and pink is also included in this index, as pink is a shade of red (it has been argued that technically there is no such colour as pink, it is just red with all or much of the green removed from white) — in these situations, the contrast is usually male and female, boy and girl.

Compare Red Index, Green Index, where the colors red and green are used for striking contrast.note Of course, where Green Is Blue, these are the same pairs of colors anyway.