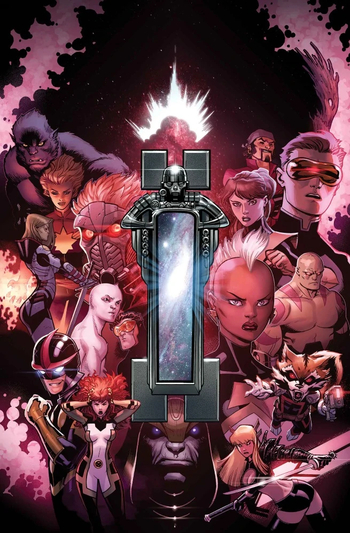 The Black Vortex is a 2015 Marvel Comics Bat Family Crossover featuring the Guardians of the Galaxy and the X-Men.

Primarily written by Sam Humphries, this crossover took place over a slew of different titles, rather than a core limited series:

The Black Vortex, an immensely powerful space Ancient Artifact thought to have been lost for eons, has resurfaced in the universe. The Black Vortex has the power unlock any individual's true cosmic potential, turning them into a cosmic titan ala Silver Surfer or the Phoenix. Mr. Knife, (Star-Lord's mortal enemy), Thane (son of Thanos), and other cosmic villains seek to claim it and its limitless power. The Guardians of the Galaxy and The X-Men are racing against time and traveling through space in order retrieve the artifact and keep it out the hands of evil. However, some of the heroes may be tempted to use the power for themselves.

The Black Vortex contains examples of: