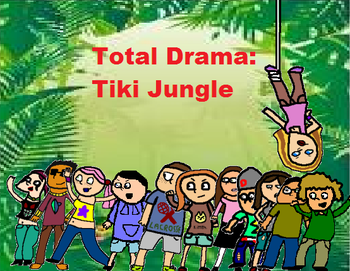 The cast of Total Drama: Tiki Jungle, or... some of it. note From left to right: Sharissa, Trey, Octavia, Nic, Manty, Julia, Elena, Devin, Chrissy, Arthur, and Carson. Hanging from a tree: Amanda. Not pictured: Gary, Helga, Meg, and Alex.
Total Drama: Tiki Jungle is the second installment in Toadgamer80's Total Drama fanfiction series, written in 2011. This story expanded on its predecessor, Total Drama School, with better-developed characters (many of whom would soon become breakout stars), plots, and humor.
Advertisement:

The story involves 16 characters—8 returning contestants from School and 8 new faces—traveling to an uncharted island in the South Pacific known as Tiki Island to compete for a new $1,000,000 prize. While it was written while the author was in middle school, many of the characters and jokes still hold up and it stands as one of the better stories in the series. You can read it here