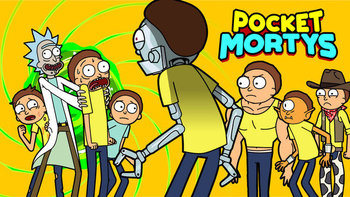 Pocket Mortys is a licensed Rick and Morty Role-Playing Game for Android and iOS which parodies the Mon genre, especially Pokémon.
Advertisement:

Rick and Morty were working in the garage as usual, when a Mysterious Rick appears from a portal and challenges them to a Morty Fight. Following him through a portal, Rick ends up in the Citadel of Ricks, where his portal gun is confiscated. In order to get it back and return home, Rick must collect various Mortys, obtain the badges of the gym leaders, and defeat the council's six head Ricks.