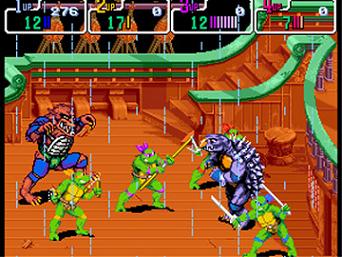 The classic side-scrolling Beat 'em Up by Konami, and follow up to 1989's also amazing Teenage Mutant Ninja Turtles: The Arcade Game. Like its predecessor, Turtles in Time is based on the four ninjitsu-trained reptilian hominids created by Kevin Eastman and Peter Laird, though heavily borrowing from the the 1987 cartoon. It was initially released for arcades in 1991, and ported to the Super Nintendo Entertainment System in 1992 as Teenage Mutant Ninja Turtles IV: Turtles in Time, since it was the fourth TMNT game to be released on a Nintendo console, after Teenage Mutant Ninja Turtles: The Manhattan Project. Take note, however, that since the Japanese versions didn't make much use of this naming convention, the game was released on the Super Famicom without any numbering.

In the comfort of their sewer home, our four heroes, Leonardo, Michelangelo, Donatello, and Raphael, along with their wise Master Splinter, are watching their news reporter friend April O'Neil report from Liberty Island for the Channel 6 News. Out of nowhere, a humongous exosuit piloted by Krang snatches the Statue of Liberty, and the television broadcast is interrupted by none other than the Shredder, who survived the Technodrome's explosion at the end of the previous game. After being taunted by Shredder, the four brothers instantly leave their home to battle the forces of the Foot Clan, only for ole' Shred-Head to send them through a time warp. Deposited in the prehistoric past, the Turtles must fight their way back to the future—most stages henceforth taking place in a later time period—in order to defeat the Shredder and retrieve Lady Liberty.

Turtles in Time added some new features such as throwing Foot Soldiers into each other and—most famously—even at the camera. Due to hardware constraints, the Super NES conversion only allowed two player co-op (instead of four like the arcade version). However, it did add some material of its own, such as a versus mode, a new Technodrome stage, Mode-7 bonus rounds, further divergent character evolution (for instance, Raph became quick but defensively weak), and new bosses including Super Shredder from the second movie and fan favorites Rocksteady and Bebop.

Elements from the first arcade game and Turtles in Time were later used as the basis of a Sega Genesis game called The Hyperstone Heist. This game lacked the fancier effects of Turtles in Time, had a completely different plot, and new levels, though many parts of those levels were recycled from the two arcade games. A slightly altered version of the arcade game, with a new soundtrack and slightly different vocal work but nonetheless untouched graphics and gameplay to the original was also included as a unlockable in the 2005 game Teenage Mutant Ninja Turtles 3: Mutant Nightmare for PlayStation 2, Xbox, Nintendo GameCube and Nintendo DS.

In 2009, a remake developed and published by Ubisoft was released as a downloadable game for Xbox Live Arcade and PlayStation Network under the modified subtitle Turtles in Time Re-Shelled. It featured high-definition 3D graphics, improved audio quality which included re-recorded voice clips courtesy of the cast of the 4-Kids animated series, leaderboards, and achievements. However, it was attacked by quite a few for not including the material that was present in the SNES conversion (it was based solely on the original arcade version), and was criticized by critics for not adding enough new material, drab colors, and gameplay alterations (for example, the Turtles could now face eight directions, rather than only two as in the original game, which often made it more difficult to hit enemies). Despite these complaints, Re-Shelled immediately became a top-seller for the two consoles' download services. As website Joystiq remarked, this "once again" proves "that regular people don't care about what critics have to say." Alas, the game was de-listed from both services in 2011 due to the license expiring. So those wishing to play that version if they haven't downloaded it already are out of luck.

Note that "Turtles in Time" IS NOT the subtitle of the film Teenage Mutant Ninja Turtles III, despite that film also being released around the same time as this game and that movie also having a time-travel based plot (this is not helped by some newer DVD copies or Netflix having this subtitle for the film).

A 2-player demonstration of the trope for the SNES port

A 2-player demonstration of the trope for the SNES port