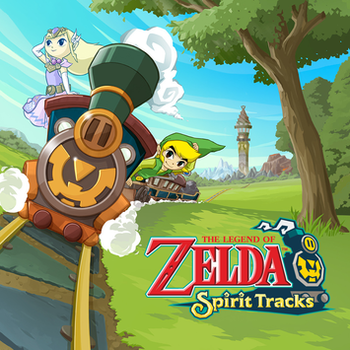 All aboard the Soul Train, baby!
"You have a very important mission ahead of you... I shall wait for you here. That's what we princesses have always done. From what I understand, it's kind of a family tradition."
— Princess Zelda, before joining you in said mission
Advertisement:

The fifteenth game in The Legend of Zelda series, Spirit Tracks was released in December of 2009. It is an indirect sequel to The Legend of Zelda: Phantom Hourglass, taking place over a hundred years after the events in that game and starring a new Link and Zelda. For the most part, controls are similar to its predecessor. However, there are several new features introduced for this game. Firstly, the player can take control of Phantoms (like those in Phantom Hourglass) to aid in combat and solving puzzles. The second major change is that this game takes place on land, not the ocean. Link controls not a ship, but a train.

A long time ago, in the land of the Lokomo people, a great evil called the Demon King was fought and sealed in the ground. The chains binding him stretched the entire length of the land, and ended up the basis for a railway system. Since then, a new Kingdom of Hyrule was founded in the land (by the The Wind Waker/Phantom Hourglass Zelda), apparently coexisting peacefully with the native Lokomos. In the present day, Princess Zelda is once again a reigning monarch in charge of a functional kingdom, rather than the Tsundere Little Miss Badass of the prior games. The story opens with Link, an apprentice engineer, needing to attend his presentation ceremony in which Princess Zelda will appoint him as a Royal Engineer. She does so despite the annoyance of her Obviously Evil Chancellor, Cole; secretly, however, she requests Link's aid in investigating why the Spirit Tracks are disappearing. Almost as soon as Link sneaks the princess out of the castle, the Evil Chancellor shows up and casts some sort of spell that separates Zelda's soul from her body. While the villain takes Zelda's body for himself, her soul stays with Link, and they team up to put her soul back where it belongs. Besides playing Exposition Fairy, it is Zelda herself who can possess the Phantoms and help Link in dungeons.

It is the third Zelda game so far to have a rating that is not the default E (it's rated E10+). The first two were the T-rated The Legend of Zelda: Twilight Princess and Link's Crossbow Training, although the latter is a spinoff game.note It is worth noting that earlier Zelda games were given higher ratings in remakes and re-releases.