NOTICE: Per wiki policy on Recap pages, ALL spoilers are UNMARKED. Read ahead only with caution! You Have Been Warned. 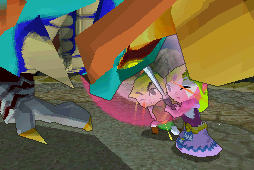