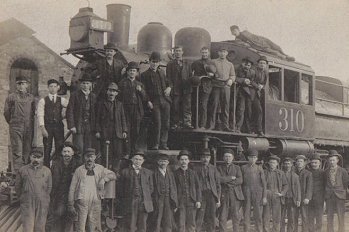 This page is for various Railroad-related character types, until they have enough examples to split off into pages of their own.

Railroad Brakeman: Notably remembered for having to walk along the top of the cars and stopping the train by manually turning the braking wheels. The brakeman also handled car couplings and track switches. This was a dangerous job in terms of life and limb, eventually made somewhat safer with the invention of air brakes and automatic couplings. The Railroad Brakeman is the train employee most likely to get into a Traintop Battle.

Railroad Conductor: Also known as a Guard in British-English speaking countries. The manager of a train and its crew, responsible for all areas other than the engine, which is the responsibility of the engineer. He makes sure all the freight is secure, and the train is cleared to move down the track. He signals the engineer when to start and stop the train. On passenger trains, the conductor also announces the route of the train, gives the "all aboard" and collects the passengers' tickets. (On large trains, the collection may be done by an assistant conductor.) While railroads were in their prime in the United States, the conductor traditionally rode in the last car of a train, the caboose. Modern trains have largely made the caboose obsolete, and the conductor is based near the front of the train. For some unfathomable reason, British railways have retired the title in favour of calling them a "train manager" instead. Some countries have one conductor per passenger car and one senior conductor (called "master of the train" in Russia) in charge of the whole train.

Railroad Engineer: The "driver" of a train. He's responsible for the maintenance of the engine, controls its speed, and requires an intimate knowledge of the route and its peculiarities. Railroad engineers are often portrayed as heroic in fiction, thanks in no small part to many railroad engineers in real life who sacrificed themselves to avoid a massive disaster.

Railroad Fireman: Also known as a stoker, he is responsible for keeping the engine fire going properly and regulating the boiler. With the end of the steam era, this position has shifted to duties similar to the co-pilot of a plane, assisting the engineer and observing what's going on outside the train on the opposite side.

Station Master: Charged with managing train stations. They would manage other station employees like porters and ticket clerks and would be responsible for the safe and efficient running of the station. During the 19th Century they would live in a house near to the station, and would be one of the "big men" in any rural community (along with the mayor, storeowner, publican and doctor). Station masters are increasingly less common with the advent of ticket machines, but "station managers" still exist at large and important stations.

Signalman: A fairly important position, because they regulated the movement of trains so they wouldn't crash into each other. In olden days, they would work in a signalbox alongside the tracks, moving levers to operate points and signals. Today, railway signals are mostly automatic and computer-controlled, but rail traffic controllers are still very important.

Railroad Laborer: One of the many, many people responsible for building and maintaining the rails of the railroad. The most famous of these is John Henry of man vs. machine contest notoriety. An important subset of these workers were "gandy dancers", groups of men who would realign the rails using metal rods known as "gandys". A substantial number of laborers in The Wild West were from China, and they have their own page at Chinese Laborer. In the United Kingdom, the workers who built the railways were known as "navvies" or navigators. The term comes from the days of canals, which were known as "eternal navigations". The guys who did the maintenance were called "platelayers" after a type of rail used in the very early days of railways.

Western Union Man: While the WU man does not derive his paycheck from and is not employed by the railroad, in rural areas, his office was often located inside the local railroad depot. Notably, The Station Master and the Signalman often shared the WU man's skillset since some railroads continued to use morse code to communicate with minor outlying checkpoint/signal stations even after WWII.