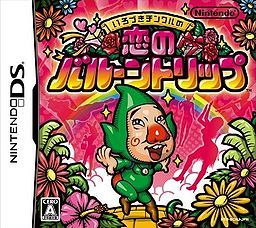 If you're reading this, you're definitely not American. Or European, either.
Ripened Tingle's Balloon Trip of Love is the Japan-only sequel to Freshly-Picked Tingle's Rosy Rupeeland. Like in that game, Tingle starts as your average everyday 35-year old until he orders a special book, which he gets sucked into after opening it. Inside, he winds up in a story that loosely follows The Wonderful Wizard of Oz. His ultimate objective is to dance with the princess that lives in the book while winning the hearts of other women throughout the story. To further the similarities to Oz, Tingle is accompanied by analogues to the Scarecrow, Tin Man, and Lion in the form of Kakashi, Buriki, and Lion.
Advertisement:

Rather than being an overhead adventure game, Balloon Trip of Love plays like an Point-and-Click adventure game, keeping the quirkiness of Freshly-Picked while expanding on it. It was originally released in 2009 and would not be available in English until almost nine years later when a fan-translation