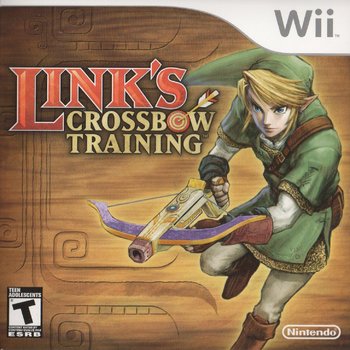 Released shortly after The Legend of Zelda: Twilight Princess, Link's Crossbow Training (リンクのボウガントレイニング/Link's Bowgun Training) is a Gaiden Game that takes place in the aforementioned entry of the The Legend of Zelda game series. It features Link as he obtains a crossbow and seeks to perfect his skill with it; he shoots targets, mows down wave after wave of monsters, defeats the enormous undead monster Stallord, and shoots fruits for extra points.

The game can be played by inserting a Wii remote and nunchuck into the Wii Zapper, the latter of which was specifically created for shooter games. Link's Crossbow Training gameplay is based on missions, of which there are three categories:

There are twenty-seven missions in total, grouped in threes as a "stage." The final mission has Link battle Stallord to win the game.