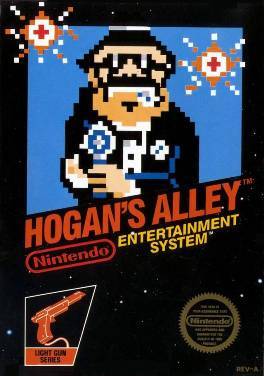 Hogan's Alley is a simple game where the player is in a simulated shooting gallery. There are three cardboard cutouts at given time, changed to five in later rounds. The player must shoot the gangsters but not the civilians or police.

The title of the game comes from the real "Hogan's Alley", which was a shooting range on Camp Perry, a training facility for the National Guard of the United States. It was closed during World War II. A later version was opened in 1987 for FBI trainees.

Hogan's Alley was available on both the NES and the arcade Nintendo VS System. An updated version that uses the Wii remote's motion-sensing technology was released for the Wii U Virtual Console as well. The game has appeared in several WarioWare titles, and the Duck Hunt Dog in Super Smash Bros. uses moves that reference the game.