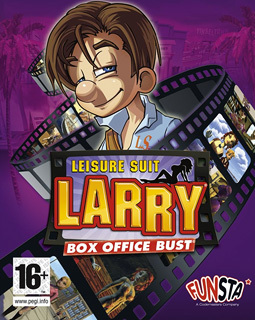 Larry is back! And this time, he's on the silver screen!
Advertisement:

Leisure Suit Larry: Box Office Bust is an developed by Team 17 and published by Codemasters. It was released on March 31, 2009 for PC and Xbox 360, then ported to PS3 on May 5th, 2009. It's the eighth instalment in the Leisure Suit Larry series.

After graduating from college, Larry Lovage finds himself helping his uncle Larry Laffer by doing odd jobs and trying to uncover a mole from a rival studio who is attempting to sabotage Laffer Studios.