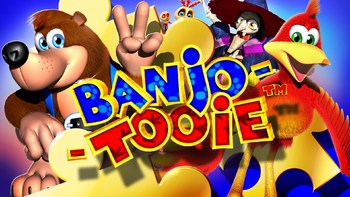 It's a sequel, but it's not #2.note Left to right: Banjo, Mumbo, Gruntilda, and Kazooie
Mumbo: Grunty wreck house and kill Bottles—she must pay! Bear and bird get after witch—Mumbo see you later.
Kazooie: Great, I get to peck some more witch butt. Let's go, Banjo!
Banjo: Sigh... I've a feeling it's not going to be so easy this time...
Advertisement:

The first sequel to Banjo-Kazooie, created by Rare for the Nintendo 64 in 2000 and ported to Xbox 360 in 2009. It's also included, alongside Banjo-Kazooie and Nuts & Bolts, in Rare Replay for the Xbox One.

Two years have passed since Gruntilda the witch was defeated by Banjo and Kazooie. After falling from her tower she was buried underground where she remains until this very day...

After her sisters bring her back to life, Gruntilda destroys Banjo and Kazooie's home, killing their mentor Bottles and totally ruining their poker night. The bear and bird must then trek through eight themed worlds to reach the top of the Isle O' Hags and get even with the witch, collecting countless shiny doodads and meeting dozens of kooky characters along the way.

Unlike its predecessor, Banjo-Tooie is less a typical platformer in the style of Super Mario 64 and more an Action-Adventure game with some Metroidvania elements and an increased emphasis on puzzles, often requiring you to backtrack through old terrain to open new paths and grab new goodies. It also has a decidedly more surreal and cynical sense of humor.

Grunty is brought back as a skeleton, thanks to Blobbelda and Mingella's magic.

Example of:
Back from the Dead

Grunty is brought back as a skeleton, thanks to Blobbelda and Mingella's magic.