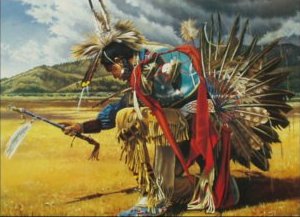 A Rain Dance is a ceremonial religious dance performed by people (usually aboriginal) who want to appeal to God/the gods to make it rain. Although it is commonly seen as a Native American device, rain dances have been practiced since Ancient Egyptian times. Rain Dances have been seen as recently as the 20th century in the Balkans.

According to That Other Wiki, the Native American version was actually another dance altogether, that got its name changed for political reasons

Probably close to a Dead Horse Trope, in fiction it is used almost exclusively for laughs. The (non-believing) characters dance, sometimes in full-feathered headdress, and... something other than rainfall happens. Sometimes the characters will look at a "step chart" after such a failure and remark, "Oh, wait, that was the ______ dance!"

And no, this doesn't allude to Singin' in the Rain! If they succeed, Happy Rain ensues. May be followed by a Redemption in the Rain shot, or possibly Battle in the Rain. One comedic result can be a Personal Raincloud.