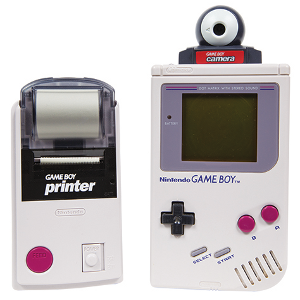 Smile! You're on Game Boy Camera!

The Game Boy Camera was a peripheral developed by Nintendo themselves for use with the Game Boy and its later revisions, and released in 1998. It's a somewhat bulky cartridge, with the actual camera inside a round "head" that can swivel 180 degrees, so you can either point it towards you to take pictures of yourself or turn it forward to use it like any other digital camera. Because the Game Boy was limited to black, white and two shades of gray with a specific resolution, that also applied to pictures taken with the Game Boy Camera. While it doesn't have the color or quality of an actual digital camera, taking pictures is just a small part of what it can do. Navigating all the wacky menus and submenus allows for things like creating short musical beats, making animations with stored photos, snapping pictures with different lens effects, playing minigames with your face inserted onto an in-game character, trading photos between others with a Game Boy Camera, and printing photos with a Game Boy Printer.