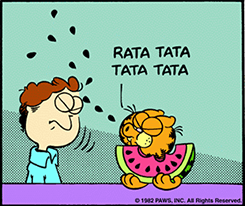 Frequently seen in cartoons (static or animated), this is when a character spits a stream of small objects (often watermelon seeds) in such a way that the result looks like machine gun fire.

May tie in to Green Thumb since this is, of course, a plant based power.

A common form of Super Spit.

Compare and contrast Flechette Storm for a different spray of small projectiles.