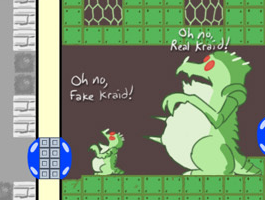 At the end of an area, you think you've dealt with the real boss... but wait! You've merely taken out a stand-in; the real boss was waiting for you to get done with it.

Trick Bosses are usually suspiciously easy, the reason being that the game doesn't want you to screw yourself over on the fake guy before the real one shows up.

A different form of Trick Boss is the type that's actually a challenge... but is a Trick Boss by story definition, as the real boss just wanted to sap your power before moving in. Occasionally, a fake victory message would show up to catch you off guard.

Not to be confused with the boss you beat with a trick. Often overlaps with Sequential Boss. If the real boss takes down the fake one for you, it's a Bait-and-Switch Boss.