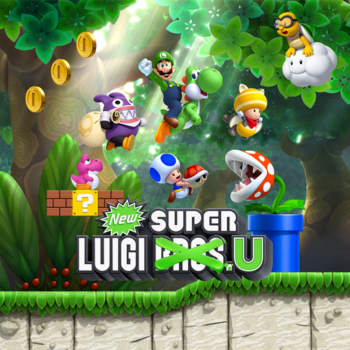 Note the crossed-out "Bros."
Phew, made it!
—Luigi
Advertisement:

New Super Luigi U is a Platform Game in the Super Mario Bros. series, originally released as Downloadable Content for New Super Mario Bros. U. It's one of the three "The Year of Luigi" games, the others being Mario & Luigi: Dream Team and Luigi's Mansion: Dark Moon (five if you count Dr. Luigi, a version of Dr. Mario with a new game mode called "Operation L"; and Luigi Bros, a minigame playable in Super Mario 3D World).

As the title suggests, Luigi stars in this installment, which contains much harder courses than the original game. The two Toads also feature, and replacing Mario is Nabbit, who can't use powerups but is not harmed by enemies. Every course has a 100-second timer, and physics are slightly tweaked from New Super Mario Bros U: jumps are slightly higher and floatier, but friction when running or walking is slightly lower.

The game released in late June 2013 for all territories, and a version released on a disc (housed in a snazzy green case, as seen on the right) was released in late July for Europe and in late August in North America. November then saw a new Wii U bundle that came with NSMBU and NSLU together on a single disc.

On January 2019, an Updated Re-release of both games called New Super Mario Bros. U Deluxe was released for Nintendo Switch. The main change to New Super Luigi U is that two players cannot play as both Toads at once, as one of them has been replaced with Toadette.

New Super Luigi U provides examples of the following tropes: