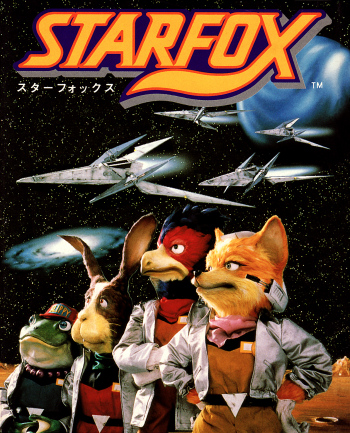 Star Fox (released as Starwing in Europe), jointly developed by Nintendo and Argonaut Software, was the very first entry of the Star Fox series. It was released in 1993 for the Super Nintendo Entertainment System alongside an accompanying comic series in Nintendo Power; the comic actually began publication before the game itself was released, providing the first introduction to the game's story, setting and characters. Star Fox was the second best-selling title of the franchise, only outsold by Star Fox 64, Star Fox's own reboot only four years later in 1997. Star Fox 64 so overshadowed its predecessor that some fans to this day are still unaware of the original game's existence.
Advertisement:

Star Fox was the first game to include the Super FX chip, a coprocessor that provided (at the time) cutting edge 3D polygon graphics, years before the PlayStation and Nintendo 64 systems made this the norm in console video game design. A sequel utilizing the revised Super FX chip, Star Fox 2, was developed for Super NES, but due to the looming release of the Nintendo 64 (which wouldn't come out for a year), it was unceremoniously canceled. Even so, Star Fox 2 was officially released as part of the SNES Classic Edition on September 29, 2017, along with this game having its first ever re-release.

The story takes place in the fictional Lylat Star System, which is populated by sapient animals. Andross, a prestigious and incredibly talented scientist from the planet Corneria was caught conducting illegal and highly dangerous experiments that threatened populated worlds. He was declared to be raving mad, and exiled to the edge of the known universe years ago. Now, He's Back!, with a massive armada of immensely powerful battleships under his command. Declaring himself Emperor of the planet Venom, he has been waging an ongoing war to conquer the entire system. The new Arwing fighters could turn the tide of the war, but most of the Cornerian military - including pilots - has been wiped out, leaving the fate of the Lylat system in the hands of Star Fox: a team of former rebels and space pirates who happen to be the only persons left in Lylat who could possibly fly them.

The game's manual can be found here,

while the tie-in comic can be read here.

Star Fox, the comic tie-in, and Star Fox 2 altogether represent a Darker and Edgier canon compared to Star Fox 64 and its sequels (though it's more accurate to say that Star Fox 64 is Lighter and Softer than them).