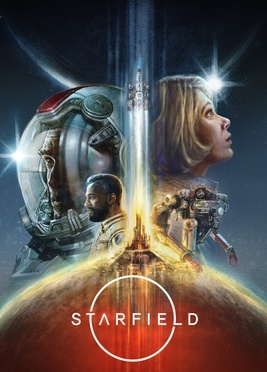 "We've come to the beginning of humanity's final journey."
"The wonder is, not that the field of stars is so vast, but that man has measured it."
— Anatole France, 1894
Advertisement:

Starfield is an upcoming "single-player epic" from Bethesda Game Studios. Officially announced at E3 2018 including a teaser trailer with a full trailer released three years later at E3 2021, the game is set for release in the first half of 2023.

Details on the plot are scant at this point but it is known that the player character will join an organization known as "Constellation" and exploration will be a major theme. It has also been stated by Bethesda executives that there will be multiple competing factions and that it will be possible to join the villains.

Like Bethesda's other flagship properties (The Elder Scrolls and Fallout), the expectation is that Starfield will be a Wide-Open Sandbox Western RPG/Action RPG in a Constructed World with meticulous Worldbuilding, but set IN SPACE!. Bethesda Executive Director Todd Howard referred to it explicitly as "Skyrim in space", and has also called it a "NASA-punk space RPG".

Per Howard, the game will be released on PC and Xbox Series X|S.