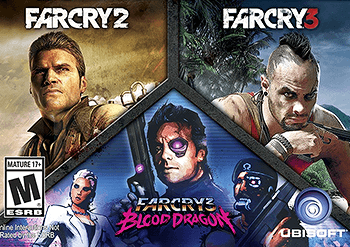 Blood Dragon is a far cry from the others.
Cyberpunk is a genre that has a lot of cool aesthetics, fashions, toys, and themes. It is traditionally defined as dystopian science fiction emphasizing the role of technology as not necessarily a cure for social ills but another tool for oppression (but can also be used for resistance). However, one thing to note about cyberpunk is that it is also very cool and there's no reason not to incorporate elements of it into works not necessarily fitting into the genre as whole!
Advertisement:

Saints Row: The Third had you face down a group of cyberpunk hackers with their own VR world, Red Dwarf had an entire special that was one long homage to Blade Runner, and Firefly once took a break from being a Space Western to deal with an evil Mega-Corp.

Cyberpunk for Flavor stories are not cyberpunk themselves but merrily mixes and matches tropes or setting elements to spruce up the world-building. They may be limited to an episode, a minor part of the setting, or even a character but they do exist.

If a work would fit in the cyberpunk genre (i.e. terrestrial sci-fi with an emphasis on cybernetics and electronics) except that it's not a Crapsack World, it should go under Post-Cyberpunk.