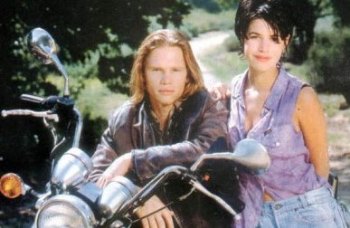 The heroes of our story.
Advertisement:

One of the first dramatic series produced by MTV, this sci-fi series debuted in 1994 and ran for a brief thirteen episodes.

Ed Bellamy (Jack Noseworthy) is an ordinary, albeit extremely intelligent, college student who finds out that he is one of an unknown number of people who had microchips implanted in their brains as infants. The chip grants Jack high intelligence but will kill him by the time he turns 21. The organization in charge of the experiment decides to cut its losses and eliminate the subjects. To this end, they frame Bellamy for murder and send an agent named Winston (Whip Hubley) to dispatch him. Bellamy manages to escape with the help of a young woman named Maria Cavalos (Lisa Dean Ryan), who accidentally learned of the project, and the two set out to find a cure for Ed's condition.