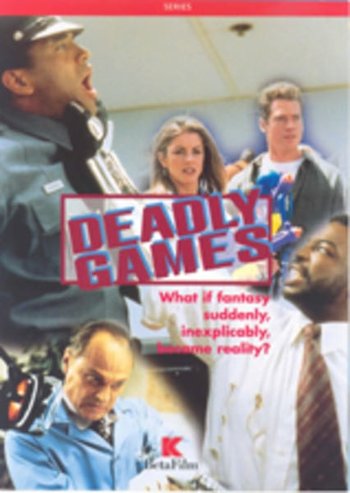 A short-lived hour long action show about a video game coming to life that aired on fledgling network UPN in 1995. Most notable for the involvement of Leonard Nimoy as an executive producer and Christopher Lloyd as the series' Big Bad, Jackal.

Recently-divorced physicist Gus Lloyd decides to take his mind off things by creating a video game in his spare time. In it, he is the hero "The Cold-Steel Kid"—a commando-type vigilante hero. Along with Love Interest "The Girl" (based off his ex-wife Lauren), he fights the forces of the evil Jackal, who are all based off people from Gus's life who have upset him.

Somehow, Gus's latest experiment causes the characters from the game to come to life, and they're planning on carrying out the schemes from the game. Now Gus, along with his best friend Peter and the reluctant Lauren (since "her" character is important to the game), have to find and stop his characters before they can carry out their missions.