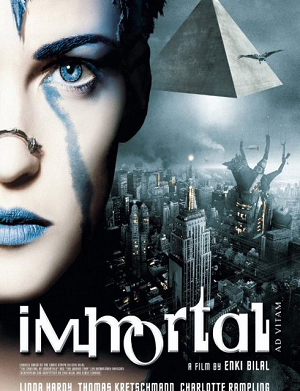 Humans, mutants, of New York or elsewhere, say no to synthetic flesh and virtual brain. Say no to Eugenics.
— Spirit of Nikopol
Advertisement:

Immortal (original French title: Immortel (ad vitam)) is a 2004 Science Fantasy film directed by Enki Bilal, loosely based on his Nikopol Trilogy series of comic books (specifically, the albums "The Carnival of Immortals" and "The Woman Trap").

It is the year 2095, New York City is a dystopian metropolis ruled by corrupt politicians controlled by the powerful Eugenics Corporation. The population consists of mutants, aliens and cybernetically/genetically enchanced humans, who are segregated by levels (with the humans on top).

One day, a mysterious hovering pyramid appears over the cityscape, a vessel for the Egyptian gods who are about to condemn their fellow, Horus, to eternal prison for rebellion. Before his sentence is carried out, he is given seven days to look upon his creation.

Meanwhile, equally strange events unfold in the city: Central Park is encased by a barrier of unknown origin dubbed "The Intrusion Zone", as none can enter it yet strange human-like individuals constantly emerge from it - refugees either from alien worlds, or alternate versions of Earth different enough they may as well be aliens; either way, their alien physiologies are of immense interest to the Eugenics Coporation, which constantly collects them for study. One of these refugees is Jill, a blue-haired, white-skinned woman with abnormal physiology and supernatural powers. Meanwhile, a mauled police inspector is investigating a series of serial killings in which the bodies of seemingly random individuals appear to have been torn apart from the inside out... and a mechanical failure enables Nikopol, a political dissident sentenced to 30 years of hibernation, to escape from prison a year early.

It's almost like some Greek tragedy, all the pieces slowly coming together.

The CGI graphics for the movie were produced by Quantic Dream. The film stars Thomas Kretschmann as Nikopol.

Not to be confused with the band Immortal, or the film Immortals. And do not, for the love of Horus, confuse with the Fan Fic My Immortal.