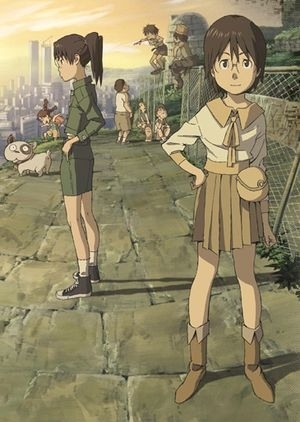 "According to rumors on the net..."
Advertisement:

Den-noh Coil (電脳コイル, Cyber Coil in English), also known as Coil — A Circle of Children, is an Anime First sci-fi series created by Mitsuo Iso and animated by Madhouse, which made its original run on NHK in 2007.

Den-noh Coil is set 20 Minutes into the Future (in 2026, to be exact) in the fictional Japanese town of Daikoku, which is the testing ground for an Augmented Reality project that involves crafting a cyberspace that overlaps the entire town. By using special glasses, people are able to interact with this overlapping cyberspace, allowing them to carry on their normal lives in addition to being permanently connected to the internet through their glasses, essentially concentrating all modern portable media devices (phones, MP3 players, laptop) into one set of non-intrusive glasses. With the appearances of 'glitches' in this augmented reality, a thriving hacker culture soon emerges amongst the children of the city.

The anime tells the story of Yuko Okonogi (nicknamed "Yasako"), a girl who moves into Daikoku together with her mother, little sister Kyoko and her virtual pet Densuke (an augmented reality dog that only people with glasses can see) when her father gets a job transfer there. Upon arriving in the town, she finds herself integrated into the glasses community of the local children, and discovers that her shrewd grandmother has become a focal point for a major club of these children, called the Coil Cyber Detective Agency. This leads to later encounters with the enigmatic Yuko Amasawa (nicknamed "Isako"), a girl with abnormally powerful hacking skills who seems to be hunting for computer viruses in the system known as "illegals" for her own unknown ends, and discoveries tying the various characters' pasts with the truths behind the city's cyber-network...

Den-noh Coil could be described as "Ghost in the Shell: Stand Alone Complex meets Hayao Miyazaki"; an extremely charming, high-quality story of children, for children, in a sci-fi setting designed to display the effects of this new technology that still manages to keep some 'magical' aspects. Despite winning several prizes, reaching cult hit status and being critically considered to be one of the best anime of 2007, the series was only licensed in 2011

by Tokuma Shoten for use in an iPhone app (since discontinued) and (after much negotiation) for DVD release in Australia. It finally got a North American release in 2016 by Sentai Filmworks under its Maiden Japan label. In January 2022, the show became available on Netflix to promote the release of Mitsuo Iso's next project, The Orbital Children, set two decades later in 2045.

According to rumours on the net, there is a list of trope examples:

Next time on TV Tropes, the index! Look forward to it.