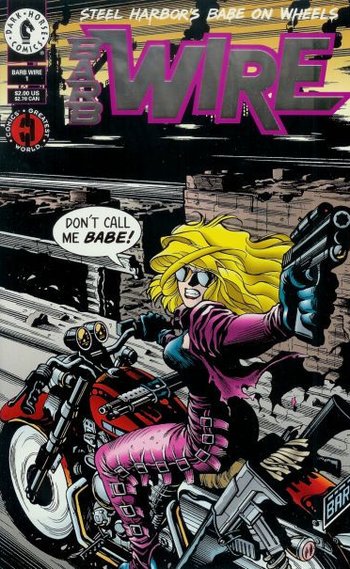 You heard her...
Advertisement:

Barb Wire is a female comic book character and part of Comics' Greatest World, Dark Horse's intent to create a Shared Universe with their own superheroes in The '90s.

The story is about Barbara Kopetski, aka Barb Wire, a bar owner and part-time Bounty Hunter (in order to pay for her bar, the Hammerhead). She has great fighting and marksman skills, necessary in a Mad Max-like town as is Steel Harbor, one of the cities affected by "The Vortex". In CGW, she's the protagonist of the Steel Harbor arc, appearing in the other issues from this city as The Machine, Wolf Gang and Motorhead. Although she's a loner, she has various allies, like her Gadgeteer Genius brother, various metahumans who aid her... and even the visit of her friend from the city of Arcadia, Ghost.

Sadly, she's more (in)famous for the 1996 Hollywood adaptation with Pamela Anderson as Barb Wire, having only the name, the blonde hair, her motorbike and her Catchphrase as the only things in common with the source. The film tanked the character's reputation, and outside of some guest apperances in Ghost, she was not seen in comics again for almost 20 years.

Her original comic ran for 9 issues in 1994-1995, and was followed by the 4-issue miniseries Ace of Spades in 1996 and a single-issue adaptation of the movie. Decades later a reboot series was launched in 2015 that lasted 8 issues. She's one of the best known characters from Comics' Greatest World along with Ghost, X (Dark Horse Comics) and Grace.