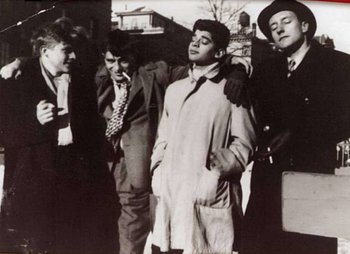 They're contemplating the libido of Neal Cassadynote  From L-to-R: Hal Chase, Jack Kerouac, Allen Ginsberg, William S. Burroughs
"I saw the best minds of my generation destroyed by madness, starving hysterical naked,
dragging themselves through the negro streets at dawn looking for an angry fix,
angelheaded hipsters burning for the ancient heavenly connection to the starry dynamo in the machinery of night"
— Allen Ginsberg, "Howl 1955"
Advertisement:
"The so-called Beat Generation was a whole bunch of people, of all different nationalities, who came to the conclusion that society sucked."
— Amiri Baraka

The Beat Generation was a group of writers best known for their work in The '50s. At the core of the Beats was a group of three writers: Jack Kerouac, Allen Ginsberg and William S. Burroughs, best known for On the Road, Howl 1955 and Naked Lunch, respectively. The name "The Beat Generation" was originally coined by Kerouac, who enjoyed the many possible meanings of "beat," both positive and negative, including beat-down, upbeat, beatific and "on-the-beat," in the musical sense. The history of the relationships between the three friends and their periphery is long and complex and is better read elsewhere than summarized here. (To give you an idea, it involves large amounts of alcohol, speed, opiates and psychedelic drugs, unrequited same-sex love, the cover-up of a manslaughter, an insanity plea and subsequent mental hospital stay, and a wife killed in a deliberate-but-drunken attempt at William Telling. And these are all separate events.)

The works of the Beat Generation vary wildly in their style, but they do tend to have some unifying features. They challenged the Moral Guardians of the time (both Howl and Naked Lunch were the subject of nationally-publicized obscenity trials) and their characters tended to be downtrodden youth trying new things (much like the writers themselves). One of the Beats' most defining features, however, was their willingness to experiment with their writing. Kerouac, influenced by improvisational jazz, called his style "spontaneous prose," where he would write without editing, often on scrolls rather than sheets so that he wouldn't be distracted by page breaks. Ginsberg's poetry combined explosive, rambling free verse with forms of the past, heavily influenced by Walt Whitman, William Blake, and William Carlos Williams. William Burroughs, perhaps the craziest of them all, popularized the "cut-up technique," a dadaist style of composition wherein a piece of writing is literally cut-up and reassembled into a new work (not unlike a collage in literary form).

Progenitors to the Beatnik, although the writers themselves were not really beatniks. Not to be confused with beets, Beats or The Beatles (although the Fab Four were certainly influenced by the Beat writers and the idiosyncratic spelling of their name is partially a reference to the movement).

Creators related to or influenced by the Beats: