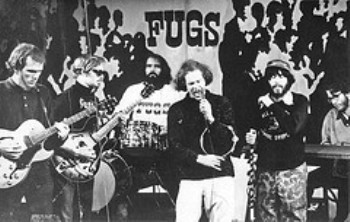 We hate war
We love sex
Two or threes
Four or fives
LSD a dimethylatr
—We're the Fugs, from "Virgin Fugs"
Advertisement:

The Fugs were the founders of Alternative Rock as we know it today. Starting off as a bunch of beatnik poets and an early example of a Garage Rock band they did for their genre what Lenny Bruce did to standup comedy: push the boundaries of what could be talked about in public and advocate freedom of speech. In some ways they are more offensive today than it was in its own time, in part due to their own influence on public tastes and all the cult rock bands that followed in their wake. Together with Frank Zappa and The Velvet Underground the Fugs are seen as the first underground rock band, but they came before everybody else.

The Fugs used a deliberately raw, crude recording style, and experimented with various kinds of performance art in their live appearances, pushing the boundaries of both artistic expression and good taste to the breaking point. Much of their work was political and social satire of the most caustic sort. They openly criticized America's involvement in the The Vietnam War, but didn't just do it musically, as most counterculture rock bands and protest singers did in their time: they activally marched along during peace protests and caused outrage when conducting an exorcism in front of the Democratic Party Committee in Washington in 1968 and later doing the same in front of the grave of communist witch hunter Joseph McCarthy. This was not without risk: they were shadowed by the F.B.I. and received many death threats.

Apart from their Protest Song material the Fugs also gained notoriety as the first rock band to openly sing about taboo subjects such as sex and drugs and always in very vulgar language. As a result they remained in the underground and never reached the same level of public acceptance as other counterculture bands of The '60s did, like The Grateful Dead, The Velvet Underground and The Mothers of Invention. The topicality of their work also makes a lot of their material heavily dated. Still, without them, many of these bands would have not existed and their albums and films, as well as the numerous poetry books of two of their founding members, Ed Sanders and the late Tuli Kupferberg, remain cult classics.

Tropes associated with The Fugs include: