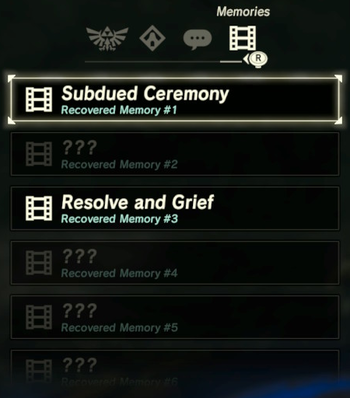 A variant of the Collection Sidequest particular to the Amnesiac Hero, where they don't recover all of their memories at once at the climax of the story (that would be The Reveal or even a Tomato in the Mirror), but rather must find small flashbacks scattered throughout the game world and puzzle them together to discover what happened to them. In other words, the collectables are story snippets — usually cutscene flashbacks, but sometimes it's just text or dialogue, or, on the other extreme, entire self-contained game levels.

The big advantage of this approach to storytelling is that it allows the developers both to tell a strictly linear, tightly-scripted story and to give the player complete freedom of exploration — because all plot events have already happened in-universe, nothing the player does in gameplay can affect them, so there is no clash between plot and gameplay, and players are in full control of how often (and even in which order) they engage with the embedded plot.

A subtrope of both Collection Sidequest and Story Breadcrumbs. Because Tropes Are Flexible, examples where the player collects the memories of a non-playable character also count, as long as they are presented in a similar way. Compare Apocalyptic Log, which, in games, also rewards environment exploration with morsels of retroactive storytelling, though usually narrating the backstory of the world itself, rather than of the protagonist.