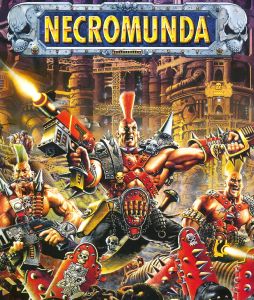 The Underhive; where life is nasty, brutish, and short. If you're lucky.
Beware the shadows of the Hive, where only the strongest endure...
Advertisement:

Necromunda is one of several spinoffs of Games Workshop's Warhammer 40,000, and arguably tied with Battlefleet Gothic as the longest-lived and most enduringly popularnote BFG's gotten video games, but Necromunda's remained in print in some form for ages, as detailed below, and was one of the first to be revived in GW's new era. Notable for functioning on a considerably smaller scale than its progenitor; it trades WH40K's significantly-sized army detachments, with dozens of models and accompanying vehicles, for small gangs with an average of 6-12 models. The gameplay is based heavily on the 2nd Edition WH40k rules (updated for compatibility with 4th Edition and later, in later editions) with some RPG-like mechanics added on. Specifically, it focuses on long-term campaigns and gang development, with gangs actually growing in size and ability with time and experience.

One of the "Hive Worlds" of the Imperium, the titular planet Necromunda is a place where industrialization and pollution have created a Single-Biome Planet consisting of vast, mile-high termite-mound-like "hive cities" devoted primarily to manufacturing weapons and equipment, and providing troops, for the Imperial Guard. Outside the hive cities, the environment has been effectively destroyed by pollution and radiation, and a perpetual smog enshrouds all but the very peaks of the cities. Necromundan society is highly stratified by class, with each class further divided into a small number of feuding clans known as "Houses." The elites reside in the "spire," which juts above the smog cloud, providing sunshine and fresh air. The majority of the population lives, works, and dies in the grim and filthy main hive, and do the bulk of manufacturing and food production. The game setting, the Underhive, is a vast, decaying, multi-level industrial wasteland populated by outlaws from the main Houses, mutants, pyromaniac religious fanatics, escaped slaves, plague zombies, Proud Warrior Race Guys, rogue psykers, and all manner of strange and deadly creatures. The hive floor consists of an immense toxic lake, surrounded by a ring of refuse, and anything that dwells there is best avoided entirely.

Although initially similarly short-lived, Necromunda enjoyed considerably more support than Games Workshop's other Gaiden Games, featuring more prominently in their publicity, and in their White Dwarf and (now defunct) Citadel Journal publications. It also had two Comic Book series based in Necromunda: Kal Jerico (following the titular rogue) and The Redeemer (following a Redemptionist in his crusade against heretics). However, it too eventually dropped off the radar, with one official expansion and a second edition, Necromunda: Underhive, being produced. The game was eventually discontinued, along with the rest of the Specialist Games range, in 2013 (having fairly consistently been the best-selling part of the range for a decade). In April 2017 a new 40K Gaiden Game, Shadow War: Armageddon, was released based on the Necromunda ruleset. November 2017 then saw the release of a 3rd Edition of the game, also called Necromunda: Underhive, which includes the basic rules, that were expanded by a number of supplemental Sourcebooks, such as the Necromunda: Gang War series, Necromunda: The Book of Peril, and Necromunda: The Book of Judgement that include campaign rules, extra gangs, hired guns and other advanced rules. An expanded hardback rulebook was also released in November 2018. The updated game has proven enduringly popular, and continued to get new rulebooks and expansions well into The New '20s, most prominently a series devoted, at last, to the Ash Wastes between the hives and running adventures in that environment, complete with new gang types and the introduction of Necromunda-scale vehicle rules (!!), with a focus on the land-trains that run between hives.

A video game called Necromunda Underhive Wars was announced in 2017 and was released on the 8th of September, 2020.

Being set in the Warhammer 40,000 universe, the game features a large number of the tropes on that page, as well as employing setting and gameplay tropes of its own.