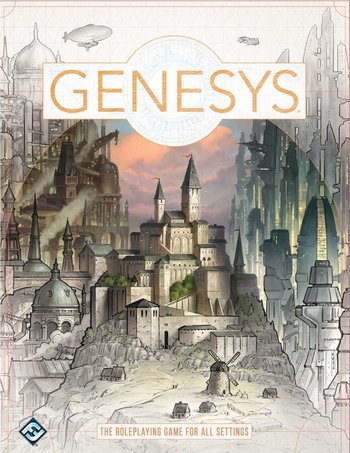 Genesys is a Role-Playing Game by Fantasy Flight Games. It is a Universal System, a genericized version of the system created for the Star Wars Roleplaying Game.
Advertisement:

Genesys is built around a custom set of color-coded dice with special symbols on them:

The dice are effectively the same as the dice in the Star Wars RPG, except without the Force Die, and with different symbols used. The symbols for success and failure are similar, but the others are very different; if the players know the symbol mapping, the dice can be used interchangeably.

Successes and failures cancel each other out, as do advantages and threats. The net results are then totaled up; for a roll to succeed, there must be at least one un-cancelled success. Net advantages and threats are used to determine side-effects of the roll. Triumphs count as successes with a significant advantage; despairs count as failures with significant threats. Triumphs and despairs do not completely cancel each other out; the success and failure parts are cancelled normally, but the extra effects will remain. A phone app for iOS and Android is available to handle dice rolling if the physical dice aren't available; in addition, the app for the Star Wars Roleplaying Game can be used if the symbol mapping is known.

A central mechanic for Genesys is the Story Point pool. The players share one pool, and the GM gets another. The pools start with one story point per player in the player pool, and one point in the GM pool. Players can spend their points to upgrade one ability die to a proficiency die in their dice pool, or upgrade one difficulty die to a challenge die in an NPC's pool. Similarly, the GM can use points to upgrade ability dice in an NPC's pool or difficulty dice in a PC's pool. Story points can also be used to activate special abilities and talents, or to give the players a spot of luck - "Good thing we remembered to bring space suits!" Spent points go into the opposite pool after the action is completed. (So, a point spent by a PC goes into the GM's pool, and vice versa.) This replaces the Destiny Pool from the Star Wars game.

Three official settings have been released by Fantasy Flight, all based on other FFG games:

In addition, FFG has made the "Genesys Foundry

" available through DriveThruRPG as a way to allow fan-created works to be published. Many settings across multiple genres are available for purchase.

Tropes found in Genesys include: