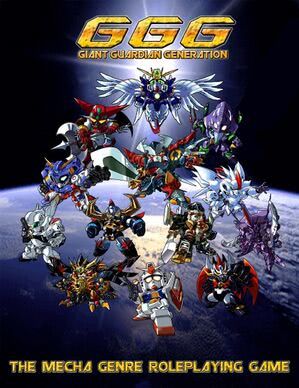 It's the year 2100 and Earth is under siege. The Outsiders have, after a 24-hour battle that annihilated most of humanity's space colonies, subjugated the United Earth Federation. Leaving the humans in the now-compliant Federation's Safe Zones, the Outsiders rove the planet looking for Gygravagnite, which has near-miraculous energy-generating properties, and which is used as the fuel for the next generation of war machine: the General Enforcement Anthropomorphic Robot, or Gear.

Outside the Federation's upper echelons, however, humanity has not decided to take this quietly. The Hiryu Islands, situated in the Far West Archipelago right next door to the Outsiders' main ship, is deploying its superpowered Gear prototypes in defense of the home islands from the Outsiders and their Botakuri minions, and the forces of the Revolutionary United Front, spearheaded by the Mobile Battleship Wagner and its ace Gear pilots are taking the fight to the oppressive United Earth Federation.

Meanwhile, in the Verne colony cluster, the survivors of the Battle of the 24 Hours are being terrorized by the Cryptids, which appear seemingly out of nowhere and which steal both biomass and memories from those they attack. The only real defense against them are the strangely biological Gears produced by the mysterious Clarke Foundation.

Giant Guardian Generation is a /tg/-produced tabletop RPG that puts the players in the shoes - and cockpits - of giant robot pilots as they battle to save the world on multiple fronts. Can be found here